For the first time in almost forever, I had a free weekend to spend as I wish last week. I brought The Little Twin to watch a show in Kuala Lumpur Performing Arts Centre (klpac). There are two reasons for this, 1) I have almost successfully turned her into a Potterhead over the past couple of years, so I figured let’s brainwash her into something else I’m starting to like, i.e. theatre shows! and 2) I don’t get to spend as much time with her these days, so I had compensate.

Now, back to Tales from The Jamban. As you may have already guessed (you did right?), the play is all about anecdotes from toilets. The two-hour show featured 10 short plays, all set in different jambans. From severe constipation, loan shark violence, daunting pregnancy test, poop analyser, vandalism and the world famous haunted school toilet, the show had almost everything that you could think of a toilet. 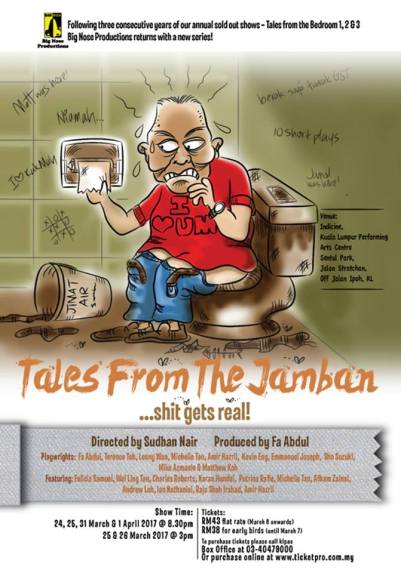 Some scenes are definitely not U-rated by Asian standards. Some dialogues were definitely racial/religious controversy by Malaysian ideals. Some were even seditious enough to trigger Pak Jib fans, Jabatan Intip Hotel and all the other touchy groups that there is laa. All the more reasons I had fun watching Tales from The Jamban. It’s rare that some of these things are said out loud in Bolehland, so it’s exciting to watch it all out in comedy.

One of the plays was about custom-made toilet bowls for all the races in Malaysia. Malay toilet that could fit four wives and ten children, Chinese toilet that dispenses tissue paper and Indian toilet that comes with a left hand (I had tears laughing by this point!). Although the show was presented in humour, there were few meaningful thoughts. One of it is to look beyond racial and religious constraints. ‘No matter what race we are, we all shit the same. It doesn’t matter!’.

I thought the final play of the ten was the most brilliantly thought-of. It was about a tourist having to choose between 5 different toilets, each who claimed of greatness and benefits. On the hind side, each had their own demands. One which demanded 5 poops per day and a big one on Friday, another which demanded only vegetarian poop on some days, and others which demanded poop in moderation (not too much, not too little) and on Sundays in particular. Did you figure yet? So yea, this is why the show could be potentially offensive to touchy people. In the end, the tourist found out that she had another choice, which had no demands.

My only regret was that I brought a 14-year-old with me. She seemed to enjoy the show, but I was on the verge of blindfolding and plugging her ears in some instances. I really did not want be the one explaining what happened in the toilet during break time after two men saw their sexy colleague walking by in short dress. Sound effects did not help at all. I sat in the front row poker faced. *awkward pause*